That was it. We want to be remembered. And it would appear the only way to ensure that happening is by becoming famous. Don’t you forget about me. I don’t want to leave this world leaving nothing behind. Having a family is one way of ensuring remembrance, at least for another generation or two. But to be known beyond that is something else entirely.

For as long as there’s a human society that remembers the last 3000 years, they will remember some of their famous children. Out of the billions, that have been, only a handful is known by name. More now in modern times, but what some of them are known for is much less worthy than what Leonardo da Vinci is known for or Gutenberg. Or Hieronymus Bosch.

It is a desire not to be forgotten that drives some people to seek fame, beyond the call of money.

What they forget is this: we’re but a blink of an eye. We as humanity have barely reached adulthood and if we manage to grow to a ripe old age remains to be seen. None of us will be there to witness it, that much is certain. 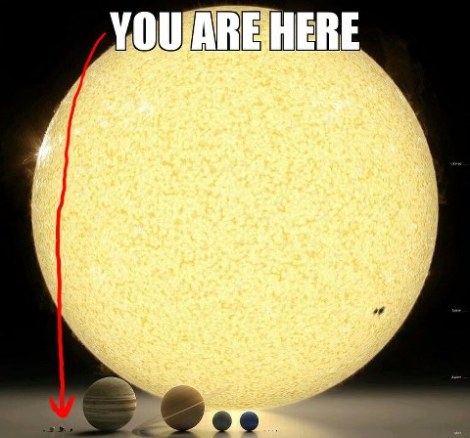 And this is just the solar system squashed together for a comparison of sizes. Do you know that Pluto has not made it around the sun even once since it was discovered? And there are still quite a number of years before it completes the whole journey. It doesn’t even begin to compute and you still don’t really know how far out Pluto is, how far away from Earth or the Sun.

But you want to be remembered. Your name shan’t be forgotten.

Let me be a little more blunt than usual: how exactly does that matter? Who should it matter to?

Live your life as best you can, be happy and be grateful that we’re living in a relatively calm cosmic period in a relatively quiet corner of the galaxy. It will change, it always has. The dinosaurs have been here over 150 Mio years. They got wiped out by a cataclysmic event really quickly. Just like that. The first hominids barely walked upright 1.5 Mio years ago.

Earth has known about six mass extinctions. What makes anyone think that we’ll be the exception? We can’t even get our asses off this planet. It’s all: been there done that. Nobody seems to make a serious effort to take human kind further out into the galaxy.

Nope, we wage religious wars, commit petty crimes, worry about the collapse of Wall Street and are offended by the notion of women marrying women and wanting to adopt homeless kids.

The only way to live in bliss is being ignorant. I know too much. I’m sorry, it brings the cynic out in me when I start to consider human vanity.

Shall we talk some more about fame, celebrities and gossip?

You are here. Celebrate that. It’s all that matters.

I am many things, most of them I am 100%, some of them 150%, none of them just half. I write, I read, I dream, I travel. I question. And I'm always looking for answers. No dream is impossible.
View all posts by 2clouds →
This entry was posted in Uncategorized and tagged #fame, #perspective, #youarehere. Bookmark the permalink.