Two days before the actual event, I found out that the London Film and Comic Con was on this weekend. Last year it was quite the same. I found out a few days before.

Since a few of the guests announced to be there had starred in some of my all-time favourite TV shows, I figured I better go.

The sun was blazing as I was waiting in the queue and Darth Vader was absolutely smouldering, hiding in the shadows whenever possible. A stormtrooper in front of me would pose with anyone who asked for it and was quite happy to put a bit of effort into it as well.

I saw Batman and Robin, Aragorn and Arwen (both female might I add), several Jokers, Willy Wonka, all Starfleet uniform designs there have ever been and so many that they could easily have formed the crew of a starship. There were aliens, Black Knights, Superheroes and quite a few monsters, not to forget Zombies.

Fan comes from fanatic, but these fans were awesome. Everyone would pose with everyone else, it didn’t matter which fandom they belonged to. A Jedi would pose with a Sith and a mini Boba Fett was with them as well. Predator and Hellraiser were threatening whoever felt up for it trying to look as creepy and malicious as possible.

All of it in good fun.

Some of the costumes were amazing. Everybody had put a lot of effort into it. And they all wanted to show it off. Compliments were paid and graciously accepted, if someone asked you for a photo, quite a few others would stop and take photos as well.

The atmosphere in the great hall of Earls Court 2 was interesting. People were curious, interested, completely in their element. There was no clamour. Fascinatingly there was this excited susurrus flowing through the hall, which underlined the atmosphere of the place.

I am a fan, but not a fanatic. I don’t own a single costume, I don’t collect anything, neither photos nor autographs. Many were in costumes, many were not. And those that weren’t, like me, may very well have been of the less fanatic kind as well.

Costumed or not, almost everyone wanted to attend a talk, get autographs or have a photo taken with their idols. They spent a lot of money on the tickets.

All I would’ve liked to do would be to shake hands. I don’t need anyone’s signature on a photo I have absolutely no use for. I wouldn’t know what to do with it or where to put it. And having my photo taken with someone I’ve been seeing on TV? It depends, maybe. But that can be expensive, too, the queues are long and then what do I do with an oversized photograph?

I would’ve really just liked to go over, shake hands and tell them how much I liked their performances in the various shows and movies I’ve seen them in.

Lena Headey seemed ever so gracious when she was signing autographs. I fell in love with her when I saw “Imagine me and you”. She’s played Sarah Connor and Cersei Lannister since and was quite a horrible villain in “Dredd”. I do love to hate Cersei Lannister and she plays her wonderfully.

Beside her was Jason Momoa, who I first saw on Stargate Atlantis. He had a shaggy haircut, a shaggy beard and wore sunglasses the entire time. He did smile a lot though, too.

Someone had a sense of humour when seating Rene Auberjonois beside Armin Shimerman. Alas, they weren’t there at the same time, which would have been fun.

The same, btw, was done with Alexander Siddig and Nana Visitor, who was the loveliest of all of them and seemed genuinely happy to be there. Those two have been married at some point, have at least one child together and are divorced. They sat beside each other but seemed both in pretty good spirits.

I had been hoping to see Amanda Tapping and Claudia Black, the latter of both was a last-minute cancellation, and at last Amanda Tapping showed up.  I prefer her with short blonde hair, but that may just be me. I obviously had a crush on Samantha Carter, even though I don’t even go for blonde, but I made an exception for her.

Amanda Tapping was late for her second round of signings, but apologized profusely and jumped right into it. She, too, seemed to enjoy herself and shook plenty of hands. 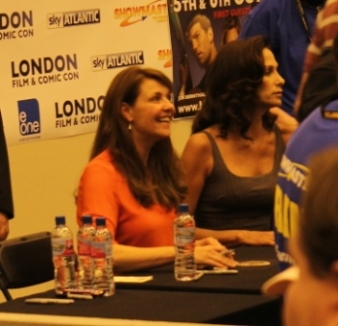 I watched everyone and wondered how much of a fan one has to be before throwing out money just to shake somebody’s hands? I could’ve gone and paid £25 to obtain an autograph I didn’t want. Or maybe not even bother with the pretence, just walk up and shake her hand and tell her I love Stargate and Sam Carter and a part of me wishes it would’ve never ended.

Do people do that? Or does everyone at least get an autograph since they’ve spent the money anyway?

Maybe I’m not fan enough. I don’t know. The next LFCC is in October and Michael Shanks and his wife Lexa Doig will be there, both of whom had cancelled this time around.

I guess I’ll be going to that one, too, see who else will be on the guest list. There aren’t many actors or actresses I’d consider having a photo taken with. I’ll see if I’ll ever get into the position of having one of them show up. That’ll be when I’ll find out how much of a fan I am.

Until then, I’ll observe and marvel at the intricacies of fandom and the power of story that inspires so many people to dress up and come out to meet those, who personify their heroes. You could see how much it means to those actors and actresses to connect with their fans and be there and be grateful because it is to them that they owe their careers.

What struck me the most was this: nobody was weird, nobody awkward. All the geeks and nerds and those that are normally called weirdoes gathered together and celebrated the best of fandom. If that had been the only reason for me to go, it would’ve been enough.

I am many things, most of them I am 100%, some of them 150%, none of them just half. I write, I read, I dream, I travel. I question. And I'm always looking for answers. No dream is impossible.
View all posts by 2clouds →
This entry was posted in Uncategorized and tagged #AmandaTapping, #DS9, #fandom, #fans, #JasonMomoa, #LenaHeadey, #LFCC, #NanaVisitor, #Stargate. Bookmark the permalink.